Traits of a French bulldog?

Frenchies are a great even-tempered house dog. They are particularly popular with urban citizens who live in limited-space apartments.

People love the fact that Frenchies are small-built dogs, and they don’t shed much. More than that, they come in a variety of different colors; they chill, bark, make you laugh,
and many more wonderful traits only left to you, the owner to discover.

So, what are the traits of a French bulldog that give them a huge fan club across the country? Find all out right below.

10 traits of a French bulldog

Physical traits of a French bulldog

The trademark erecting
bat ears are highlights that hard to ignore when looking at a Frenchie. These
ears don’t come all the way up when your Frenchie is at his first phase of
life. The pointing process grows with your dog’s development. On a normal
growth, you should see the ears start an upward trend around seven weeks.

But the odd may occur
when you don’t see any sign of the ears standing up. This is when human
interference will help. The owners can tape each ear up and keep it flat to
avoid a crinkled base. Then, navigate the ears to the right position and leave
them there for 4 to 5 days and gently peel off to remove.

Frenchies are as well
famous for their unique appearance resembles a bulldog in miniature. Their
faces feature heavy wrinkles rounding the bug-eyes and narrow nostrils. This
brachycephalic face shape gives the dogs the exclusive yet amusing look with
which their personality comes along.

However, the short-nose
resulted by the awkward shape takes away the ability to breath properly, thus
making Frenchies belong to non-sporting dog group. 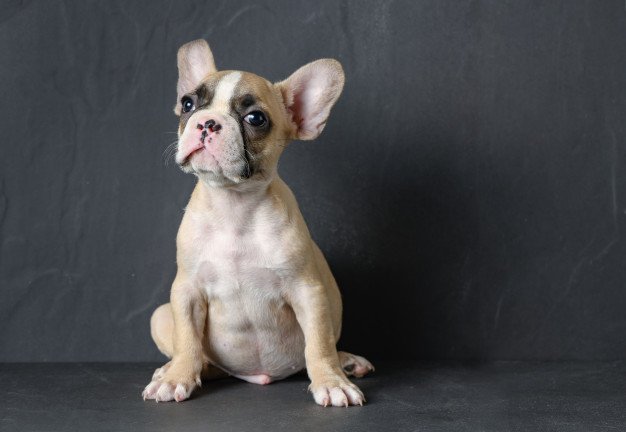 A mature Frenchie can
weigh up to 28 pounds; females are smaller. We consider them great apartment
dogs with little to worry about them sharing your living space.

Although small,
Frenchies are muscular dogs if they are on a sufficient diet, which explains
why they are heavy on the hands.

Frenchies are not furry
in spite of a thin layer of hair. This could be a plus to those who are
allergic to dog fur and not prone to cleaning hairballs under the couch. But
don’t laugh yet! The dogs shed though, only a little. If you keep a regular
bathing routine and grooming your Frenchie well, the shiny and silky coat will
be a reward.

Do Frenchies have tails?
They do, but it’s docked exposing their butts on the show. It could be a minor
for many dogs but not a serious concern for French bulldogs.

The selective breeding
from ages has given the breed this tail form for some reasons; not all of them
are bad. No tail means more speed and no attack to this weak point.
Interestingly, this corkscrew tail further adds a cosmetic appeal to the breed.

So, does it mean no
wagging tail? Hmm, yes. But you have a better make-up, a loyal unique canine
fellow.

The low-profile plus
stumpy legs don’t make Frenchies a racer although they may have all the willing
playfulness. When standing up on four legs, Frenchies only reach around 1 foot
tall. In addition to that, the height is not significant when they stand on
their back legs.

And you know the
obstructed airway through their narrowed nostrils doesn’t allow beyond-the-line
exercise.

Among the traits of a
French bulldog, color is a prominent one.

You can find French
bulldogs of many colors. The popular varieties are fawn, cream, and black, with
many shades of brindles. It’s rare to see a Frenchie with a solid color coating
the entire body. There should be specks and streaks of light and dark patterns.
Some dogs even wear a different pigmentation on the nose, ears, and places
along the body.

Exceptionally, blue
French bulldogs are rare among the colors for the uncommon recessive gene
diluted, causing the blueish hair to grow irregularly. No doubt, natural born
blue Frenchies are close to zero. Although there are breeders attempt to cross
and spread French bulldogs of this color, it’s not encouraged by any dog
association. Not to mention the extremely high cost for one blue dog.

**Caution: Run away from
breeders offer budget payment for a blue French bulldog because there is no
truth for a cheap but healthy rare dog.


Read more: Why it’s impossible to have a French Bulldog under $500


Exceptionally, blue French bulldogs are rare among the colors for the uncommon recessive gene diluted, causing the blueish hair to grow irregularly. No doubt, natural born blue Frenchies are close to zero. Although there are breeders attempt to cross and spread French bulldogs of this color, it’s not encouraged by any dog association. Not to mention the extremely high cost for one blue dog.

**Caution: Run away from breeders offer budget payment for a blue French bulldog because there is no truth for a cheap but healthy rare dog.

Frenchies love their
humans, but not the people and animals around that human. They may act as they
suspect you are sharing the love with someone or other pets. But it’s not hard
to get your dog introduced to the household members and children. Other dogs and
cats may take time but not impossible.

But after all, French
Bulldogs are incredibly friendly to kids and affectionate to all households.

Regarding the high
demand for possession, Frenchies like to keep your company at all time. They
need you to cuddle, pet and pay attention to them everywhere. So, it’s likely
to see your French pup following you from room to room.

Another mean of your
attention is Frenchies can’t help themselves in some particular troubles like
falling into the water to struggling to breathe. That said, you don’t let your
dog roam around the neighborhood when you are not there to watch. The dog is
not suitable for a home-away worker, too.

Consider this French
trait when you decide to adopt one.

People don’t rate 5
stars for the smartness of French bullpups but that doesn’t imply any dumbness.
The dogs are trainable to cues and a few intricate orders. However, they are
also famous for being stubborn. That is why you will need extra patience and
consistency when teaching Frenchies.

Suffering from the
brachycephalic syndrome, the dogs commonly snort after a time playing and
running. That should explain why French bulldogs are restful dogs during the
day.

You may also hear your
pup snuffle in his sleep due to this collapse of the airway.

So, again, don’t give
your Frenchies too much exercise and don’t get them hyperkinetic in any play.

Every dog has his
greatest to grow while living with a loving owner. So, be that perfect owner and
give your Frenchie the still life he deserves.

Having a Frenchie
following you around only promises to make your day. The breed doesn’t demand
much except for your affection and proper care that will prolong his life up to
12 years. Spending time with this breed, you will discover more than 10 traits of a French bulldog mentioned above.

In the end, we’d like to
address that a French bulldog is not a budget dog. To ensure welcoming a
healthy bull pup to your home, please seek a reputable breeder with years of
experience.