Looking for cheap French Bulldogs under $500? Knowledge is power. Keep on reading.

French Bulldogs – the clowns of the canine world. Loved and desired by so many, but definitely quite an investment. Here are a few reasons why:

The cost of breeding a French Bulldog

Before you decide to breed it’s important to clear your dog of any unwanted, genetic disorders.

If you don’t own both a male and a female, a stud fee is required. The better quality the male (good structure, no genetic issues) the more expensive the stud fee.

Sometimes the price can reach up to $6000, just for that. Can you imagine? Secondly due to their body shape and narrow hips, 80% of French Bulldogs can’t breed naturally and Artificial Insemination is required to produce puppies.

Females then require to birth the puppies via C-section. Some of them can whelp naturally, but C-section is a preferred option if you want to make sure all the little pups survive. The procedure is not cheap, $1500-$2000.

After the puppies are born, they need to be fed every 2-3 hours for the first 10 days, which as you can imagine can make breeders very sleep deprived. It’s also not recommended to keep the female around babies without supervision for the first week or two. Even though [Frenchies](https://ethicalfrenchie.com/) are great moms, they can accidentally kill the babies by laying on them.

After that come all the vet bills. Making sure all the dogs are healthy, have their shots, have been dewormed and are parasite free, etc. Don’t mention the quality food the breeders have to provide while the puppies are in their care. So if a breeder would sell **cheap French Bulldog puppies under $500**, that wouldn’t cover any of the initial expenses.

### How much does a French Bulldog Cost?

The prices of French Bulldogs vary, but let’s say the typical price for a standard one would be around $2500.

By standard we mean **brindle, pied, fawn, cream**. Again it all depends on the breeding cost.

Did the breeders own both male and female, did the female gave birth naturally, etc. If they invested more time and money, the price will go up.

You will pay much more for “rare” colors and variations, such as **blue, chocolate, black and tan or lilac French Bulldogs**.

The price will also go up if you your dog is from a “champion blood line” or has a genetic mutation that makes him “fluffy”. The fluffy Frenchie is very rare and goes for as much as $15000 and more.

As you see there are many things that affect **how much does French Bulldog cost**. But if you are at the end of the day looking for a Frenchie companion because of their amusing, loving qualities, the color doesn’t play a role.

Ok, the part you were waiting for.

You are scrolling online with the the intention to find **inexpensive French Bulldog puppies for sale** and maybe you find some. Should you be alarmed?

Well it really depends. There is a big chance the puppies are produced in a puppy factory with less regulation, less care, no genetic testing, zero vet care, etc.

Long story short the breeder didn’t invest that much, so they can be sold for less.

Dogs in a puppy mill often live in dirty cages without any access to the outside world, aren’t receiving the basic care and are bred multiple times in their lifetime before dumped in a shelter

. Since the females aren’t cared for, the chances are the puppies aren’t in the best shape either. So at the end of the day, you get what you paid for.

Next time you see a post with **inexpensive French Bulldog puppies for sale** at an alarming price, our advice is do as much research as possible. I know the puppy looks cute, but it might be a heartbreak waiting to happen.

### Still set on a French Bulldog puppy, but can’t afford the investment? We offer payment plan options for our French Bulldog Puppies for sale. Reach out to us directly for more information. 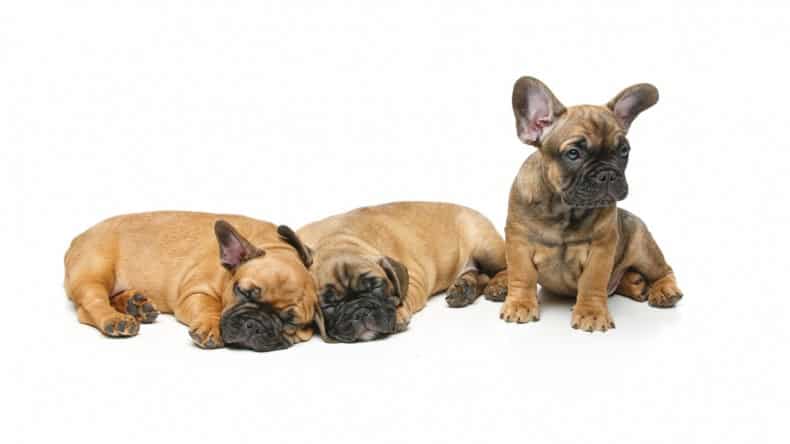