The French Bulldog has
its name on the list of the most popular dog breeds across the UK. But the
interest of owning one Frenchies doesn’t come solely with the high initial cost
whatsoever; the French bulldog health risks are going to add up the
after-expenses.

According to researchers
at The Royal Veterinary College (RVC), UK, Frenchies with their brachycephalic
face, are vulnerable to ear infections, diarrhea, and conjunctivitis. 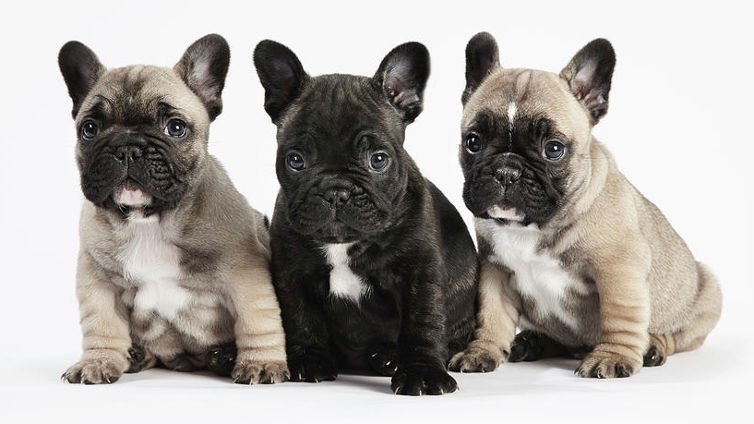 Although the dogs are known to be the “healthiest” of all the “bully” breeds, treatments for any
suffering can be costly.

That is why it always makes sense to get your Frenchies from a reputable breeder and invest in pet
insurance.

Since the health issues involve genetic, there are things to know about Frenchie health conditions and how to deal with such problems.

In recent years, the
dramatic rise in popularity of the Frenchies is unprecedented. Dr. O’Neill from
RVC worried that it was this high-demand was damaging to the French pups’
well-being.

Dogs that are bred to
have a flat face like Frenchies are prone to various degrees of health problems
including chronic ear infection, skin allergies, inverted tail, dental health,
breathing difficulty, and other bone-related diseases.

If adopting a French
bulldog is the next thing you want to do, please consider the most common
genetic health issues of Frenchies below.

When the immune system
encounters an alien substance that the body is not built to endure, it becomes
a state of over-reactivity called allergies.

Allergy can be a result
of poor breeding and improper care. That said, your Frenchies may not be able
to consume a certain type of food or intake drug.

The causes could be
anything like fleas, allergens in food, pollens, dander, or even your perfume.
So, there is no better solution than visiting your vet when you are unsure of
what is going on that makes your Frenchies suffering. Or, at least call and
consult the doctor if the case is not severe.

Brachycephalic, one of the most common French bulldog health risks, refers to “a short head” or “flat face.” This means the dogs have to breathe through a short muzzle and compensate by respiring through the mouth.

The brachycephalic gene is a curse to breathing because it comes with narrowed nostrils resulting in an
obstructed airway. While many people consider this as aesthetical, Frenchies are having a hard time getting enough air to their lungs.

“When it comes to exercise, rather than going for one long off-lead walk every day, it is safer to take three shorter off-lead walks as brachycephalic breeds tire easily and find it difficult to breathe due to their short muzzles. It is important that an owner understands the needs of their pet, monitors their breathing while exercising, and takes extra precautions to ensure they don’t overdo it.”

This is the major reason
for Frenchies not to be resilient to many physical efforts. Although the dogs
don’t seem uncomfortable with their endowed beauty, owners should not exhaust
them with extreme exercises.

If you see your
Frenchie’s eyes are getting abnormally red, it’s the sign of the inflammation
of the tissues characterized in swollen and red eyelids.

The causes can be
allergies or dry eyes. You can rub the eyes of the dog to comfort the
irritation. If you visit the vet, you may have anti-inflammation medications to
relieve part of the pain.

What’s dangerous is in the consequence

Infected tissues can
spread and affect other parts of the surrounding, or worse, lead to canine
distemper if the case is not treated.

For bacterial infection,
antibiotic medications may be prescribed. If the cause is by allergies, it is
possible to apply to eliminate diet which will rule out the possible causes in
foods and cut back whatever is the culprit of the sickness.

Cancer is a rare but
possible cause of pinkeye. In any case, consult your vet right away for the
best remedies.

This health disorder
exhibits the tear gland protruding out of the red membrane in the eyes. The
swelling will grow larger and redder and later damage the eyes.

To correct this terrible
illness, many vets will recommend surgery to remove the tear gland. However,
the postoperative result can develop dry eyes for the rest of the days. 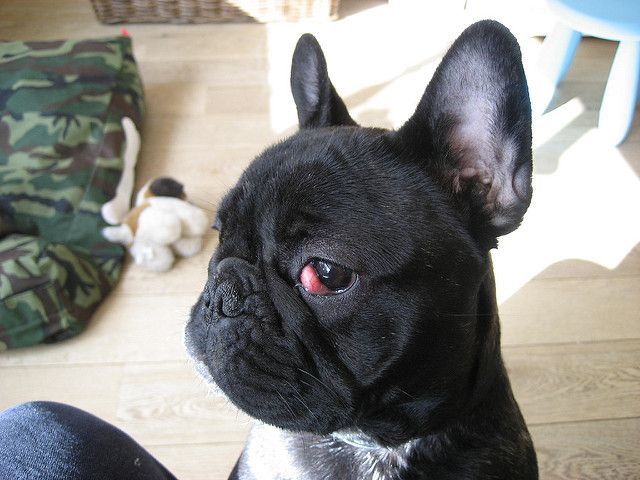 But don’t leave this
sickness untreated or it can seriously impair your Frenchie’s vision and grow a
horrible discomfort in the long run.

The dogs usually
struggle to cool themselves when the degree is up. This difficulty associated
with the short face in which Frenchies can’t release the heat off efficiently,
eventually leading to heat stroke.

To know if your French
pup is suffering the heat stress, notice if he is panting excessively, in
convulsions or even vomiting.

In the presence of those
uncomfortable symptoms, immediately move your dog to a cooler area or at least
provide some shades. Gently massage the dog’s legs and cool him down with cold
pad. It is possible to place him in a bathtub if there is any.

The skeletal disorder
results in the disposition of socket joints of the hip. It is the first form of
hip arthritis and many chronic joint pains in the long run.

It’s not hard to observe
the irregularity like “bunny hopping,” hip sensitivity, inability to climb
stairs, unwillingness to join activities, or difficulty in standing up.

Hip dysplasia occurs in
rather bulky Frenchies than dogs with well-proportioned bodies. It can also due
to environmental factors or a genetic predisposition to cause the disorder to
happen.

Treatments for such
ailment can be physical therapy and diet control. A healthy diet will surely
minimize the chance of meeting this illness.

Otherwise, a hip
dysplasia surgery for French bulldog can cost from $1,600 to $5,000. The
operation procedures depend on the pooch’s age, namely:

·
Juvenile Pubic
Symphysiodesis (JPS): for pups if 10 and 18 weeks old

·
Double or Triple
Pelvic Osteotomy (DPO/TPO): dogs of less than 8-10 months of age

The inability to hear
can come from genetic defects. It also happens in senior dogs. People reckon
merle French Bulldogs, the dogs with genes associated with the lack of pigment
cells, are the kind that is prone to this hearing loss.

It could be funny to
think how the color affects the listening ability, but there are indeed little
hairs called cilia doesn’t grow without the presence of pigment cells causing
deafness in Frenchies.

You can take your dog to
a clinic and request a BAER test to diagnose the hearing ability for French
pups as young as 6 weeks old.

Taking care of a
brachycephalic pet is not a picnic work. It requires extreme care and love; on
the other side is finance and patience to look after the French Bulldog
health risks.

That said, please think
responsibly before you want to adopt a French bulldog. Consider if you have
enough time and money to give the dog a healthy yet fulfilled life.

Also, never think you
can get a Frenchies under $500 or else it’s a scam. Remember that poor breeding
is the primary trigger of many negatives that come after. So, don’t buy or
encourage any cheap breeder even with exclusive deals.

Traits of a French bulldog you may not know